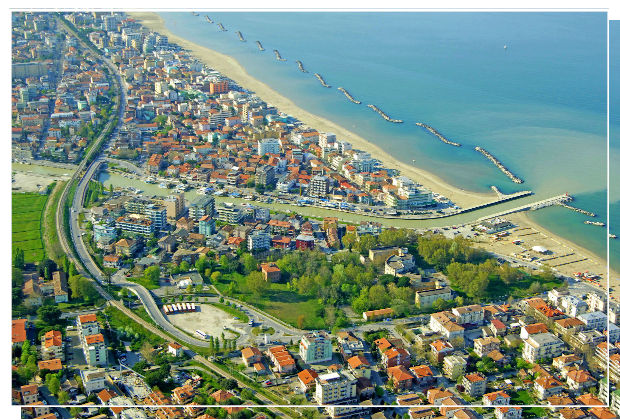 Bellaria Igea Marina is geographically situated in the northern part of the Province of Rimini and is one of the most famous seaside resorts on the Adriatic Riviera, thanks not only to the 7 km long coast of fine sand but to the city itself, to its urban structure and services such as tourism, hospitality, sports centres, wellness centres, and the nature where the hills marry beautifully with the sea which offer evidence in the territory of ancient historical events.

The name Bellaria appeared for the first time in a document of 1359, as the name of a fortified farm which was located near the church of Santa Margherita, near the mouth of the river Uso. The town changed hands, including those of Malatesta: currently the name of the place (Castèl) is the only still remaining memory.
The city centre has a pedestrian-only area (“Island of Platani”), enriched with valuable flowerbeds in the commercial centre of Bellaria, where you can stroll among the many fashion shops, small local craft shops, pubs, bars and bakeries, restaurants, game rooms.
At the beginning of ’900 Vittorio Belli, a doctor, who came from a family of farmers and commercial businessmen in Rimini, had conceived a holiday village rationally arranged, surrounded by pine trees, created by planting thousands of pines. He gave the name of the goddess Hygeia, daughter of Asclepius to a holiday village, designed in the pine forest between the river Uso and “Torre Pedrera”. “Marina” was associated with the name Hygeia, when summer camps for children settled in the southern area of the town. 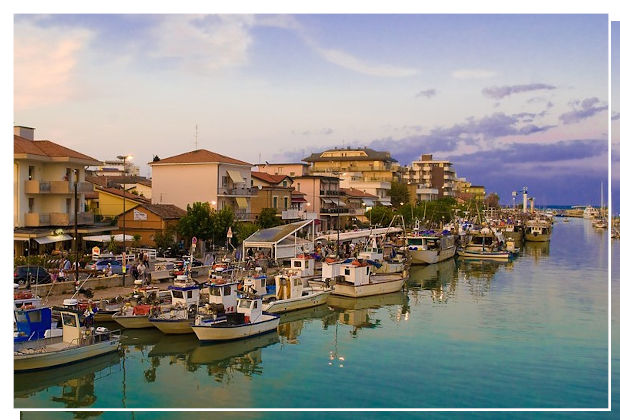 One of the liveliest places of Bellaria of yesterday and today is the port. Since the end of the nineteenth century, a hamlet of houses, more little than huts, inhabited by fishermen who docked their boats in the river, extended on the mouth of the river Uso, which became a shelter port.
There were spears, flat-bottomed pinnaces, and fishing boats, small sailing boats, rowing boats used for “land” fishing, that is close to the coast. Not always, however, they managed to sail or to return because of the too low sea depths which were very dangerous in case of rough sea. This brought a perennial claim by the navy of Bellaria.
When eel fishing occurred, a real autumn migration to the delta of the Po took place, where men spent months in huts of wood and straw. The youngest and the oldest ones, in good season, practiced “treats”, a network stretched from the boat and then pulled manually from the shore.
The fishwives finally took charge, by bicycle, to bring the fish to the villages and to the scattered houses of the hinterland, often exchanging agricultural products. The fishing activity in Bellaria has never stopped, even though the port does not allow the berthing of larger vessels such as the ones of Rimini and Cesenatico despite the improvement of the facilities. Today, the people engaged in fishing are about two hundred gathered in cooperatives.
Using innovative trawling techniques they devote themselves to the trawling, to the fishing of clams using gill nets in trammel nets, fish-traps for the capture of cuttlefishes, with baskets, of sea snails, with cugulli or bertòvelli (fish traps), of eels, or they are engaged in the cooking of marine mussels and oysters. Furthermore, in the streets of the country the call of the fishmongers is sometimes heard, but most of the product is sold through supermarkets. 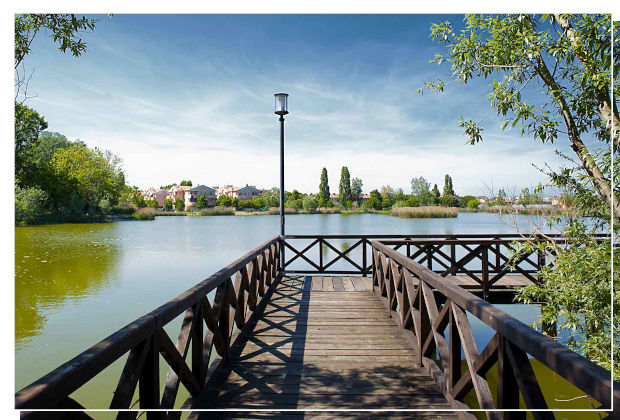 Gelso Park is one of the largest green lungs that can be found in the urban areas of the Adriatic Coast .Its name stems from the lake located almost in the centre of the park where you can relax in the rich greenery and walk in the thematic areas such as the one dedicated to games, a butterfly garden or the new area Jurassic Gelso, in which prehistoric time is recreated through different objects of fibreglass. This makes the park one of the funniest and most interesting destinations for children and adults, whether they are residents or tourists. Gelso Park is also the ideal place to relax practicing fishing, jogging or walking in the shade of the vegetation and the cool lake.
Pavese Park, located further south, is an area of particular fascination for its adjacency to the free beach where parties and events are periodically organized. Right on the beach in front of Pavese Park summer evenings are animated by the great concerts organized by Beky Bay, the centre of entertainment that attracts young people from every part of Romagna. 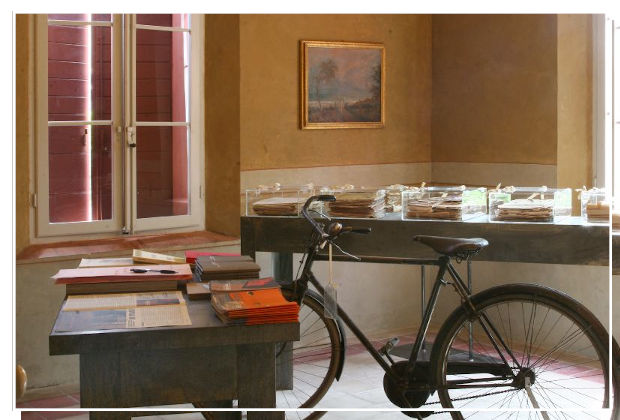 The Red House, the summer residence of the writer Alfredo Panzini, stands on a sand dune, and from its windows you could see the sea and the hills of Romagna. Today it is included among the railway and the Park, with buildings all around. It‘s the villa – purchased in 1909 – where the writer AlfredoPanzini (Senigallia 1863-Rome 1939) spent with the family a lot of his years especially in summer, becoming a meeting place for friends and writers and for him a privileged point to observe the rural world that flowed in his fiction. It remained long in disuse until a great restoration and an extraordinary set up have reopened it to the public since 2007.
Made in Art Nouveau Art Deco style, ceilings and walls of the room and the other rooms are decorated “dry”. Today we have finally realized the full conditions for the protection, conservation and enhancement of the literary heritage left by Panzini, accompanied by commitment to archival preservation, research and cultural planning, in connection with the territory. The entrance welcomes visitors with sails that bear handwritten words to catch the wind toward the sea of memory. There is the famous bicycle – the very strict Opel – La Lantern of Diogenes and field trips. Upstairs there is a bedroom with bedside cabinet and armchairs. There is a bathroom that deserves to be seen for the refined and intelligent revival. There is also the study which is today an exhibition space, with the desk drawers and many manuscripts. 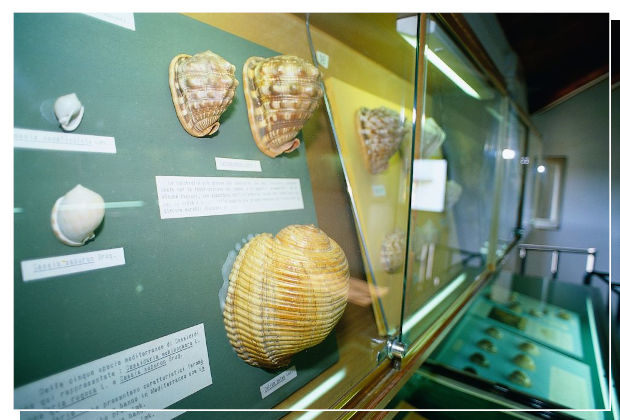 On the upper floors of the building a malacology collection has been set up with findings stemming in part from the collection Wishes Rome, purchased by the town of Bellaria and ordered by the Institute of Zoology of the University of Bologna. Worth a visit because of a large number of shells, molluscs, skeletons of marine organisms Madreporaria, echinoderms, crustaceans, shells of turtles that you can see live. Among the most significant examples you will admire some nautilus Indian Ocean tritons, large scrolls, pearl oysters and the rare spacecraft used for the incubation of the eggs. The Museum includes an extensive series of shells and molluscs and a huge collection of skeletons of marine organisms Madreporaria, echinoderms, large crustaceans, shells of turtles. 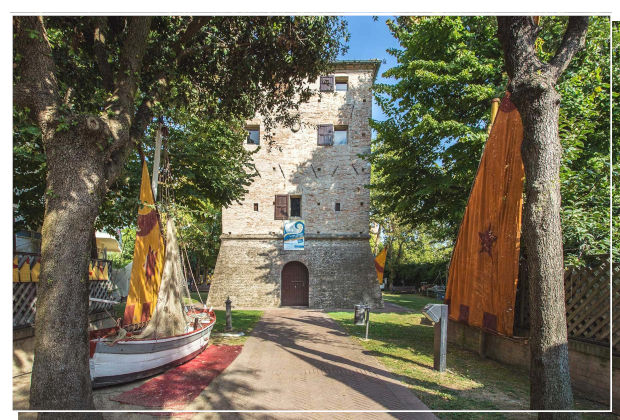 Inside the tower, built in the seventeenth century by fishermen, you can admire the splendid malacology and paper money collection.
After the invasion and looting of Turkish pirates in the last years of the sixteenth century, the Papal States finally decided to build a series of towers along the coast, from Tavollo to Bellaria, to defend the inhabitants of the coast. Within them, at that time standing very high on the dunes and on the beach, there was a garrison of five soldiers and a commander, equipped with “muskets, mortar, powder and fuses.” At the sound of the bell, in case of danger, the residents could “be closed inside it” and organize for the defence. The Bellaria Tower was built in 1673 by the Apostolic Chamber for the fortification of the coast, the only one left with the original characters of six in three-story vaulted and with a spiral staircase. Over time, the function of the towers was transformed to host quarantine “suspected infection” from the sea for commercial traffic, “especially from Genoa” and for surveillance against smugglers. More recently, the Tower of Bellaria hosted the headquarters of the Italian Finance Police.

How to get us

By car
Highway A14 exit Rimini Nord and follow the directions to BELLARIA IGEA MARINA. After the second roundabout, the one with the State Road SS-16, continue straight in via Tolemaide and follow the indication sign to the SEA.
Continue along Via Tolemaide, and reached the roundabout in front of the sea, turn left and after a few kilometers, after the colony area, arrived in the center of Igea Marina, in front of the beach N. 64 you will find the Hotel Meritime.

By train
Bellaria Igea Marina is located on the Rimini-Ravenna line, The hotel is located about 1 km. from Igea Marina station and 1500 mt. from Bellaria station where there is a taxi service to the hotel. Alternatively you can get to the Central Station of Rimini and from the square in front of the station, take the bus N. 4 for San Mauro Mare (every 20 minutes) get off at Igea Marina at bus stop number. 42 which is located 30 meters from the hotel.